My excuse for not posting this month’s diary on the first is that I had a nasty reaction to my second booster – but I’m thankful to be fully covered at least for the next few months. Also, the third was my birthday and who wants to be working on their birthday?
My third book for Boldwood, Duty Calls at Goodwill House, is now available on preorder and I’ve started writing the fourth book which will be out in November, I think. In future I’m writing just for my publisher – my regencies, although they are still popular with some readers, don’t have the following they used to have. It makes sense to put all my limited energy into my World War II books which are so successful. I’ve just sent my final Christmas Regency to be edited which will come out on preorder in August and the last book in my current Regency series, An Arranged Marriage, will be on preorder at the end of this month.
On the domestic front my lovely British Shorthair cat, Loki, is now flying in and out of the catflap and has learnt to walk along my 6 foot garden fence. So far he’s not falling off and has managed to return safely from wherever he goes. This cat isn’t allowed out of night as I think Billy Blue, the cat I lost so suddenly and so tragically last year, was almost certainly poisoned by something he ate on his nocturnal travels.
On the sixteenth of this month I’m travelling to London for a second time this year to attend my publisher’s first party. I can’t wait to meet the other writers will be 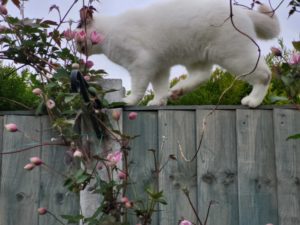 attending I’ll be staying overnight, but this time a Premier Inn and not a four-star luxury hotel next to the Tower of London. I’ll tell you more about that next month.
We had our first rain for weeks yesterday and I’ve discovered that my new garden furniture with waterproof cushions has not lived up to its description. The material might be waterproof but the water still got inside – I suppose I’ll have to make sure I take them inside if it rains next time.
It’s a worrying time in the world at the moment and I expect, like me, you try and concentrate on the good things and ignore the bad news. I count myself lucky to be relatively healthy, to be surrounded by loving family and friends and to be so successful in my writing so late in my life.

Last week we were sitting in the garden enjoying the sunshine today we are shivering inside with snow on the ground. I was hoping to start buying some plants for the summer but think that had better be left until the end of the month this year. My lovely Loki has now mastered the cat flap and is in and out all day. I have to peg it open as he hasn’t quite worked out how to push the flap, but hopefully that will come. The clocks went on an hour in the UK and that meant instead of waking me up at 5:10 he now wakes me up at 6:10 – result!

The government seems to think it’s no longer a pandemic but an endemic – I think they’re wrong as that the moment one in twelve people have got Covid – and it’s causing havoc in schools and workplaces. It’s no longer a legal requirement to self isolate if you have it ,but most people have the common sense and decency to remain at home whilst they test positive. My family have had it but thankfully I didn’t catch it from them.

Three weeks ago I went to the RNA awards in London and stayed at a posh hotel near Tower Bridge and I hadn’t been to London for years – since sometime before the pandemic in fact – and it was wonderful to meet up with old friends and new. It was especially gratifying to meet my new publishers in person as well as several other Boldwood writers. A very kind neighbour looks after my cat whilst I’m away. Next month Boldwood are holding their first party – I’m going to that and lots of us are staying in the same Premiere Inn. It’s just a shame it’s the wrong side of London for me but I’m sure I’ll manage it – a friend I’ve not seen for six years is coming from Portsmouth, another one from Bath, so I’ve just got to get on with it and stop moaning.

On the writing front everything has been going splendidly. My two books with Boldwood, The War Girls of Goodwill House and New Recruits at Goodwill House both have bestseller flags and New Recruits is still on pre-order and doesn’t come out until 7 April. I’ve published the penultimate book in my latest Regency series – A Convenient Wife – and the last book will come out next month. I’m currently writing my Christmas Regency and I suppose that having snow helped me set the scene.

I’m about to start the fourth book in my Goodwill House series as this has to be handed in by July. This will be the first of my World War II books not to feature RAF or WAAF characters – the next three are going to be about land girls.

I can’t sign off without mentioning the dreadful war in the Ukraine. My thoughts and prayers are with those innocent people trapped in appalling conditions as a direct result of Putin’s unhinged behaviour. I hope that next time I write my diary the war will be over and the six million refugees can start to return to their beloved country as its slowly rebuilt with the help of Ukraine’s friends and allies.

I think it must have been almost a year since I last wrote a diary entry. My old website ceased to exist and I now have a wonderful new one done by Bookswarm. I’ll be able to update my diary more frequently now. A lot has happened in the past year and I’ll give you a short resume of how things are for me now.

My beautiful British shorthair cat, Billy Blue, ate something that poisoned him and he had to be put down in September. I now have Loki – from the same breeder but he’s a lilac colour point – cream with lilac ears and tail and a cream body. He’s living up to his name – but he’s only nine months old and I’m sure will be calmer when he’s older and can go out in the garden unsupervised.

As you know I joined the wonderful publishers, Boldwood, a year ago and since then I’ve got two books out and the third, almost completed, and this will be handed in by the end of next week. The first book, War Girls of Goodwill House has had a bestseller flag ever since it came out in January and has already got almost a thousand more 4/5 star reviews. The second book in the series is on pre-order, New Recruits at Goodwill House, and when I last asked had fifteen hundred pre-orders. This will be published on April 7 th. The publishers and I are very happy about this. The third book – the title hasn’t been settled yet – will be out in July and on pre-order in April. My Boldwood books come out in every format and are also being sold into The Works.

My Aria Zeus books are also doing really well and I hope they continue to do so. The final book in the Girls in Blue series, The Officer Girl in Blue, came out last October and all my Aria books are now available in large print, audio, paperback and you will also find them in The Works.

On the home front I had solar panels with a battery installed last November – the battery has already ceased to work – and also a very expensive and extremely smart automatic awning. I now need equally smart garden furniture to sit on under the awning. I’m also going to get a small barbecue – I’m not sure I’ll use it but you never know.