Jubilee Celebration in the UK 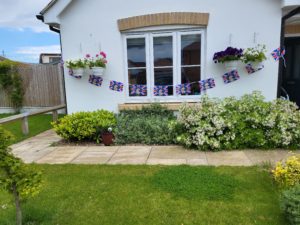 This weekend the UK is celebrating the platinum jubilee of Queen Elizabeth II. Seventy years on the throne – this will never happen again in anybody’s lifetime so I think it deserves a bit of celebration even if one isn’t an active supporter of the Royal family. I actively disliked them after Princess Diana died but over the years I’ve mellowed and can now respect the dedication and hard work of a woman who is still giving her all at the age of ninety-six.
Where I live we’re having a party on the communal green but the weather forecast is dire and I think it’s going to rain. I’m making four dozen cupcakes which have to be decorated in red, white and blue and have little toppers with the Queen’s face on it. My neighbour is making the same number of crown -shaped cookies. I’ve got my bunting up, and the green area is already decorated in a similar fashion.
I think with everything being so grim in the world, mass shootings in the US, war in the Ukraine, millions of children and families slipping into the most awful poverty in the UK, it’s a good time to celebrate the amazing achievement of this elderly lady. We have an extra bank holiday and I think we all deserve it.

Until next time – Fenella J Miller