June has been a busy month.

I can’t believe how quickly June has flown by – it’s  been helped by the lovely weather we’ve been having. My garden is looking fantastic and I’m spending so much time out there, mostly deadheading and watering. I’ve held three barbecues – I think they might be the only three I ever have as it’s just too much faffing about for me. Next time I entertain people for lunch it will be a cold collation unless one of the guests volunteers to barbecue.
My cat, Loki, is now officially an adult cat. He is an absolute joy – very affectionate, very vocal, and funny as well. I’m going on holiday tomorrow and I know he’ll be miserable without me but he’d be far more miserable if I put him in a cattery for a week. My neighbour is coming in three times a day to feed and make a fuss of him. She is also going to water the garden twice so he’ll spend time with her then.
My third book for the fabulous Boldwood is coming out on 26 July – it’s already got literally thousands of pre-orders and thank you if you’re one of those readers who’ve done that. The fourth book – the first of three in the Goodwill House series about land girls – has had its structural edits (very little to do ) and will come out on 6 November this year. I’m already three chapters into the fifth book which has to be handed in at the beginning of October and will be out in January or February next year.
Do you like my new avatar? I look a bit windswept, but very happy, which is how I’m feeling at the moment. I can now look back my beloved husband with love 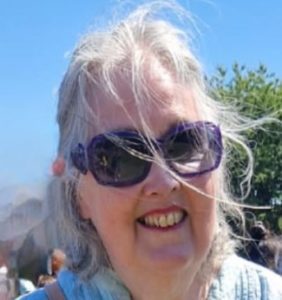 and fond memories. I’ve been making an effort to get fitter – I doubt I’ll ever get much thinner – and it seems to be working. Three years ago as I was using a walking stick because of the arthritis in my feet but I’ve found a combination of herbal products that have made a huge difference. I can now walk a mile without pain and do so most days with my neighbour and her little dog.
I hope you are all enjoying the summer – unless you live on the other side of the world – and do what Monty Don says – don’t just work in your garden but sit down with a cup of tea/gin/beer/coffee and just enjoy it.