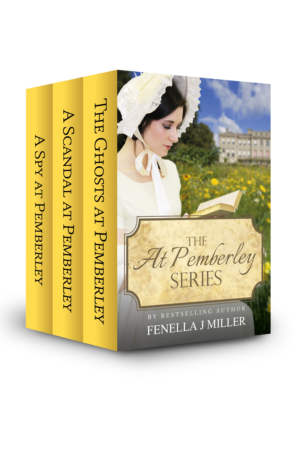 The Ghosts at Pemberley: A Christmas Ghost Story
Miss Kitty Bennet is travelling to Pemberley in December in order to become a companion and friend to Miss Georgiana Darcy when disaster strikes. Adam Denney, the Rector of Bakewell comes to her aid and is much taken with her. Bingley is hurt in the accident and he and Jane are obliged to remain at The Rectory, whilst Kitty continues her journey.

The coach accident is just the first of many terrifying incidents that occur once Kitty is established at Pemberley. Somehow her arrival has woken the spirits that occupy the East wing and these ghosts are determined to get their revenge on those who trapped them in the spirit world. Elizabeth is in danger and Darcy is determined to keep her safe. Can the power of God defeat the evil or will Pemberley and its occupants be destroyed?

A Scandal at Pemberley is Georgiana Darcy and Major Jonathan Brownstone’s story. The major is to be groomsman for his best friend, Adam King, when he marries Kitty Bennet at Pemberley. Georgiana is about to embark on her first Season, but after meeting Jonathan she is having doubts about going. As Lizzy is expecting twins Darcy can’t accompany his sister but is happy for his new brother-in-law to stand guardian in his stead

When George Wickham arrives uninvited at Pemberley he sets in motion a chain of events that could cause a scandal from which none of the family would recover.

A Spy at Pemberley is the third and final book in the ‘At Pemberley’ series. Darcy and Lizzy have been married for some time and their union is going through troubled times. This is bought to a head when Caroline Bingley, who always had designs on Darcy, arrives unexpectedly.

If having Darcy’s old flame under her roof wasn’t enough for Lizzy to contend with, Colonel Fitzwilliam, an intelligence officer, arrives also. However, this isn’t a purely social call as he needs Darcy’s assistance to entrap two spies who are passing secrets to the French. Against her better judgment Lizzy is drawn into this dangerous escapade and asked to invite the suspects to a house party at Pemberley.

As Lizzy and Darcy dash from Pemberley to London and back again they not only unmask the traitors but rekindle the spark that brought them together all those summers ago.